Where I've been Wednesday

I was woken up abruptly, from my bottom bunk in an unfamiliar room, to the sound of my alarm. It was 4.30am and I was in a hostel in the centre of Copenhagen.

My brain kicked in to gear and I remembered that I had planned to head out extremely early, before the tourists and selfie sticks emerged, to watch the sun come up – but after little sleep, I questioned whether it was worth it* because after all, the bed actually was rather comfy…

*spoiler: it was SO worth it.

I scrambled in to my clothes in the darkness, so as not to wake the girls in my dorm (a courtesy they’d failed to show me the night before, but whatever!) piled my hair on top of my head and set off in to the early morning with my camera in tow.

Heading for the usually bustling Nyhavn harbour, I strolled through the narrow cobbled lanes lined with bikes propped up against the walls, the echoe of my footsteps the only sound to be heard – there was not a soul in sight.

I walked along the length of the harbour, taking snaps as I went, mesmerised by the beautiful reflections cast by the faint morning light.

It was lovely and mild, so I put my camera away and found a spot to sit for a while and watch the sky turn a pinky orange as the seagulls swooped by.

Whilst I was up anyway, I decided to go and see the Little Mermaid statue, displayed by the waterside at the Langelinje Promenade.

I’d heard the statue was nothing special, but she’s one of the most famous tourist attractions in Copenhagen and at over 100 years old, it’d be rude not to!

The sunrise by the harbour had been a soft gentle glow, but by the time I reached the Little Mermaid, the sun had burst in to a gorgeous bright orange ball and lit her up beautifully. 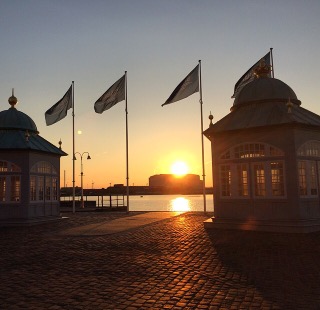 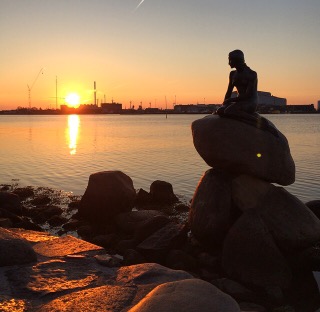 Other than the seagulls and the odd fisherman, I was completely alone welcoming in the new day and felt sure that I’d been rewarded for sacrifing those extra few hours of sleep!

My tired feet carried me back to my hostel, the city coming to life around me, so I could doze for an hour or so before finding a hip cafe for breakfast.

I felt as though I’d been let in on a secret that my fellow roomies were unaware of – a sunrise just for me – and ok, so I was knackered and still had the whole day ahead of me yet, but I reckon my trip to Copenhagen was  made all the more special for it.

There was an error retrieving images from Instagram. An attempt will be remade in a few minutes.